Pinan One Self Defense Techniques

The Truth About Pinan One Applications

Let me outline a bit of history in connection with the Pinan One Techniques I am going to show you on this page.

I began Kenpo Karate in 1967. Studied for a couple of years, became an instructor and wrote the training manual for the school. One day I came across an interesting bit of Karate History. Ed Parker had begun by teaching these forms called Pinans. They were from classical Karate, and they are outlined perfectly in the first book he wrote.

So was I studying Karate? Or was I studying some variation or interpretation? Well, I wanted the original stuff, and I wound up at a school called Kang Duk Won, which was a version of Karate taught before Gichin Funakoshi.

I studied KDW for many years, practiced it for decades, and I came across something rather interesting: the Karate that I was so proud of had probably not been taught back in Okinawa, it probably bore little resemblance to that samurai butt kicking original art.

The first hints were in my own researches of body motion, and you can read all about that stuff in my courses that deal with Matrix Karate, and other martial arts that I have matrixed.

During Matrixing I began to see all the things that I had not been told, the techniques that were withheld, not because they were a big secret, but because the instructors just didn’t know about them.

Then, one day I picked up a book, Shotokan’s Secret, by Dr. Bruce Clayton. Dr. Clayton described how Karate was created, and the blinders came off. He talked about battle strategies, what the samurai of the day wore, and how Karate was designed for these strategies and uniforms.

Now, I want you to go over the following technique from Pinan One. It is the way I was taught, and it is probably the original technique taught by school at which Gichin Funakoshi studied. Go over this technique, then I am going to go over a couple of points with you, and then show you the truth about this technique.

Pinan One Self Defense Technique One 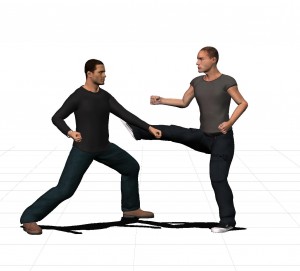 We were taught that the attacker thrust a kick, and we were supposed to step back into a front stance and do a low block. 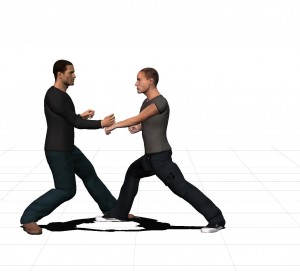 The attack would continue with a body punch, and we were supposed to roll a hammerfist over and down on the attacker’s fist. 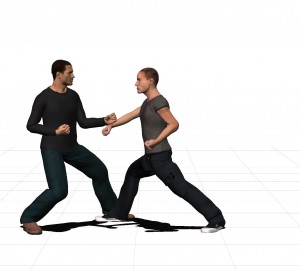 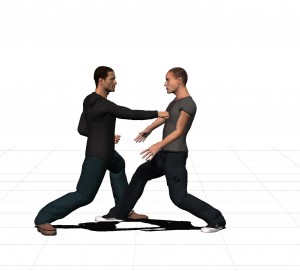 The attacker would be softened up by now (broken carpal bones in both his hands), and we would finally launch our definitive punch to the body.

Now, there are several things right with this technique, and several thing wrong. First, people don’t punch like this, and the rolling hammers required split second, pin point precision, which was good.

As I said, I came across Dr. Clayton’s book (the guy at the Martial Arts Supply Store said it was garbage, but I got it anyway), and things changed.

Dr. Clayton pointed out not that the punches weren’t done that way, but that a Samurai wouldn’t punch. He would draw a sword and start hacking. At best, if ordered to do so, he might grab somebody, and though this was a stretch, it was possible. And, it might even be likely if you inspect the types of clothes the Okinawan Imperial Bodyguards wore. There forearms were just inviting targets to be grabbed in the case of an order of restraint.

One of the other things that Dr. Clayton pointed out was that the pinan karate kata were designed for use in the Imperial throne room, and against specific types of warriors. Further, as a fellow became an Imperial bodyguard he would be placed in specific places in the throne room, and he would work his way up, and change his position as he learned the strategies that each form taught him.

Now, the weakness of Dr. Clayton’s work is that it has no techniques. And, double the weakness, Dr. Clayton is a Shotokan stylist, and would actually not know the original Pinans. He would know the Japanese versions of Karate, as presented in the Heian forms.

I knew the Pinans, and I began to think deep and hard about what he said.

No punches, grabs, or swords, these were the things that the Okinawan Imperial bodyguards had to consider.

So, I want you to work your way through the following technique. It is redone with Dr. Clayton’s information in mind, and I think you will find it rather interesting. 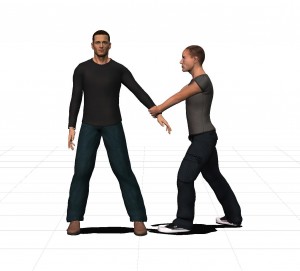 Not a punch, but a two handed grab to the forearm. Heck, the Okinawan Imperial bodyguards had no weapons, so a simple grab, to make sure no knife appeared, and that would be about it.

Instead of blocking a kick, simply step into the person and drive your arm downwards. It would be difficult to hold and you might break the grip right then. There is also the potential for a headbutt. However, a samurai being a no nonsense fellow with a tremendous grip from all that sword work, he might just continue to hold on. 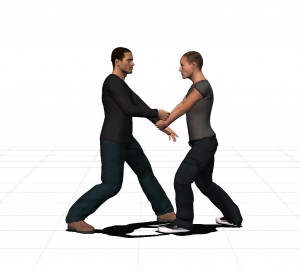 If he doesn’t hold on you could hit him. If he does, you simply snap the fist over and punch his wrist. If you could break some bricks, you might be able to break his rigid wrist, and one soldier is somewhat out of the fray. But, what if he holds on with the other hand. 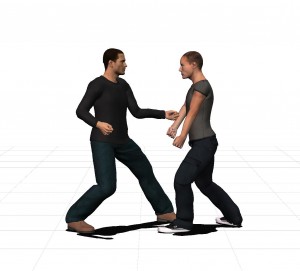 If he doesn’t hold on, you could roll that second hammer, chang it into a punch of some sort, and take him out, or at least push him away (armor might be tough, you might want to push instead of bang your fist on armor). If he does hold on, you simply roll the fist over, it is simple, try it, and punch his other wrist. I have doubts about the actual punch, I think the punch was maybe to train the bodyguard to roll his wrists out of a grab, but, either way. At this point you have trained him to punch, trained him to break grabs, and in very realistic fashion. This is stuff that could work on the street in modern times.

And, you punch him. Or, if he is wearing armor, you thrust him back with a punch, possibly even a stepping punch. Thus, the basic step and punch of the form becomes not a slow and unworkable punch, but a way to train people to step into opponents and thrust them away forcefully.

Now, take the information I have given you here, and play with your own Karate. See if you can find grab arts and sword disarms and all that sort of stuff, stuff that would be appropriate in handling a samurai.

And, I would be remiss if I didn’t add a plug for myself, especially if you don’t know these forms, or don’t know the original Kang Duk Won versions.

I have included the first ten basic Imperial Bodyguard forms, plus fifty techniques, in a Kang Duk Won book. This is the original forms, and the original techniques, as I was taught them. Any changes I have made are small and insignificant. It is only a ten dollar instant download.

I also have a couple of other things. I have an old video showing some of the Kang Duk Won forms. It is old, bleary, I was young, but it isn’t bad. It is included on a course called ‘Evolution of an Art.’ If you’re interested, let me know, I have URLs I can give you so you can get more information.

And, I have a recent video I call Temple Karate. It has the five pinans, and six other forms (two arts, actually), and in these I show more of the Samurai busting techniques that I believe the old Imperial Bodyguards had to learn.

My prices are economical. I only charge ten books a book, or ten books a CD or DVD, so anybody can avail themselves of my data. And, I do have data. I have been studying the martial arts since 1967. Kang Duk Won since 1969, and I have studied virtually every style of karate there is, and I was a writer for the mags. So, I encourage you to take advantage of what I have to offer. It’s hard to get personal lessons from somebody with over forty years in the martial arts, but that ‘s what my books and CDs and DVDs are, very personal communications. I believe in the Martial Arts, and I especially believe in Karate.

This has been a page about Pinan One Self Defense Techniques.