Kickboxing Karate: The Three Techniques That Will Win Every Street Fight!

I know, kickboxing karate isn’t a real martial art, but it is a translation of arts. When you translate from an art like karate into something like kickboxing, or from kickboxing to karate, you can win every single fight you are in by knowing three very simple things. We are dealing only with the hands in this study of martial arts techniques, so make sure you stay at punching distance. 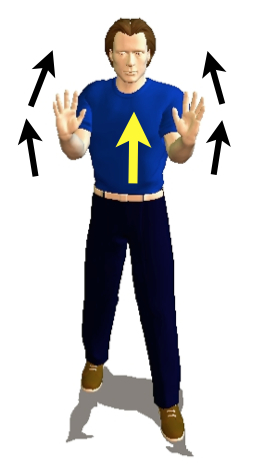 Make him punch inside, outside, or down the middle!

The set up for these Martial Arts fighting tricks is to have the palms facing outward, elbows about 135 degrees, so that the hands are in front of the shoulders. This, incidentally, is an ‘I don’t want to fight’ sign, which is a good thing because it is better to avoid a fight in the first place.

The basic concept in this set up is that two objects can’t occupy the same place in space. Go on, shove one book through another book. You’ll just end up with two books.

First ‘Kickboxing Karate’ Technique, he is going to punch around your arms on one side. All you have to do is move with him, hard block, and start punching.

Second ‘Kickboxing Karate’ technique, he is going to punch around your arms on the other side. Move to the other side and pass his strike and start punching him.

The point here is that he is going to go around one hand, or the other, and this will set him up by shutting his weapons down, or opening his targets up. A little practice and you will be able to tell which way he is going.

Third ‘kickboxing karate’ technique, and this is the one we want, is when he tries to go between your hands. He can be blocked easily, and by closing your hands you trap him. You can work his elbow and his wrist into an arm bar, and when he tries to back out, or otherwise wiggle, you elbow roll him, and you can work elbow spikes and secondary punches, all while keeping his arm trapped.

This freestyle technique can be made even juicier by closign the hands and shifting the body, and thus encouraging him to attack the way you want him to. Or, you can widen your hands and encourage him to come down the center and into your armlock.

The point here is that you will make him totally predictable, and nobody is easier to beat than a fighter who is totally and utterly predictable. So that is how you actually matrix the initial entry into a fight, and when you win that fight just tell everybody you were doing kickboxing karate…heh.

Kickboxing Karate is the applied science available in Matrix Karate.