There are lots of Karate styles, but they boil down to three main systems. Here is how the three systems came to be.

A Japanese fellow named Kanbun Uechi went to China, presumably to study and possibly help in the family shipping business. 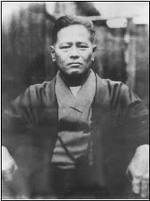