This ‘lost Karate Kicking Technique’ was the first bit of real Karate I ever saw.

I was working in a fast food restaurant at the time, and spending my spare time teaching Chinese Kenpo, when I saw a Karate Kicking Technique that I had never seen before. Oh, I was a Kenpo True Believer. Best stuff that ever walked the universe, if you get my drift. But I hadn’t seen this karate kick. 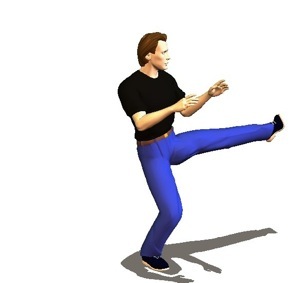 Then, one day, a dweeb went to work for the restaurant. He was an idjit. A know nothing, and I looked down on him.

I was standing at the register, looking into the backroom, and this kid, thinking nobody is watching him, gives a hop and a kick, and the whole wall began shaking. It was a karate kick I had never seen, and it is the lost karate kickign technique that I am referring to in this article.

He backed off quick, and it was obvious that he hadn’t meant to kick the wall that hard. But it was too late, I had seen him.

“What was that? What did you do?” Yet, I knew it was Karate. It was a karate like I had never seen. An instructor in Chinese Kenpo for a couple of years, and I had never seen real Karate.

“No, that was Karate. What kind of karate do you study?”

He blathered on, but it was too late. I had seen, and I wanted.

He studied an obscure style of Karate known as Kang Duk Won, and, unbeknownst to me, it was a direct line to the Karate that Funakoshi studied. Not Funakoshi himself…but before Funakoshi. This was the real stuff. BEfore tournament and college power groups and all that sort of thing.

And the kick he had done? It was a simple shuffle kick. Start in a back stance, and move both feet at the same time. The rear foot lands where the front foot was, and, at the exact same moment, the front foot impacts on the target.

Two things happen when you kick like this. One, you sink your weight at the point of the kick, which stabilizes and increases the amount of power in the kick. Two, you move the body as one unit.

Interestingly, I have never seen anybody in the mixed martial arts scene do this kind of kick. It is a fight ender, a massive blast that crunches anything before it. That can knock down a wall if you get a little too quick with it.

Well, that is real Karate, and it is too bad, but there aren’t any martial arts schools today that do this lost karate kicking technique.

Tales of the Kang Duk Won

His fists were large...as was his heart.

The Kang Duk Won I speak of was on The Alameda in San Jose back in the sixties. It was a Korean Karate Dojo of immense martial spirit.
The mat was dirty and ripped. Sometimes it seemed like there was more duc tape than mat.
The front window was broken, again, a testament to duc tape.
There was a hole in the roof in the dressing area. The toilet was tilted 15 degrees, there was no place to hang your…what?
Does it sound like I am complaining?
No.
I am remembering, and that as hard as I can.
There was magic there, you see.
The Hells Angels, and other bikers, came to study the Kang Duk Won for one simple reason…it worked and it was the best.
There was a wide variety of student, glass blowers to grave diggers to pilots to college students to…me.
There weren’t many schools back then, but people came from all over the bay area to study with an extremely soft spoken man. A man who could poke his finger into a board and leave a hole.
Of course, it’s gone now.
Replaced by a dress shop or something like that.
The bar across the street doesn’t see karate students come in to soften their bruises with liquid…just yuppie types whining in their beer. Not real men.
There are no longer twenty Harleys lined up in front of the school, and the air is no longer split by the thunderous kiai of a score of sweating, battered, energized maniacs.
Now it is peaceful, and that is a shame.
Political correctness? Ha! I laugh.
The truth is not political correctness, that is just a method for cowing people into voting politely.
The truth is sweat and bruises and blood. It is being young and not saying no. It is staying out too late and enjoying life with your friends.
Ahh, it has all been said before, but that’s okay.
There is a purpose to life, you see.
There is a spirit to be forged and that is in every man.
The Kang Duk Won is gone…but it will come again.
That is inevitable.
That is the magic.
Check out Learn Karate Online if you want some of that magic in your own life.

The Truth About Real Karate Philosophy

One of the great misconceptions of the martial arts, and we are dealing with karate philosophy and concepts, is the obsession with the point of impact. While it is of vital importance to get to that point, you won’t get to that point unless you analyze the motions in between the ‘stopping points.’

Studying this ‘in between’ motion is what leads a person to mushin no shin, or mind of no mind (time of no time).

The following win shows that reading the matrixing materials opened the door for this student. He is not talking about the stopping points, but rather is fascinated by the motion between. Matrixing is the only technology that opens that door, that makes a person look at the in between motion, and to bring awareness ‘into the curve,’ as opposed to putting it in the stop. Yes, a few do it over the decades, but Matrixing explains the concept and makes it happen now.

“Matrixing to me means to be able to adapt to anything that is given using natural unbroken motion. We should know how to use our tools in conjunction with the body. This “anatomy in motion” can now be truly understood by matrixing. The “True Art” is knowing the body in motion and being able to interpret that motion with your tools. I think it is very important to teach concepts and principles so that any art can be fully understood. Students will know longer be slaves of poor instructors and practitioners.”

I find this student’s last remark absolutely enlightening. Yet it is not the poor instruction we must break from, it is our adherence to misunderstanding the true karate philosophy and concepts involved.

If you want some real karate that is extremely effective, check out the Kwon Bup.

Win #19–Here’s Some Real Karate Power For You

My wife was teaching school, and she asked me to come in and talk about Karate breaking. So I went to the store, bought a bunch of wood, and went to school. Here’s the funny thing, I hadn’t broken anything for years. I just worked out, did the forms, taught a few people, and that was it. But the power of the Kang Duk Won, once gained, doesn’t go away. In the pic I’m breaking four boards. For those budding Karate Kids that morning I broke five boards, no spacers, with no special training. You know, breaking stuff isn’t hard, at the Kang Duk Won we actually chuckled at how people were so enamored by it. I mean, you just practice hard, make sure you don’t quit, make sure you have fun, and breaking was the least of the things we learned at the Kang Duk Won. There were so many other abilities that we gained, intuitive abilities where we could control time, mess up the way people perceived the world, all sorts of things. Well, those days are gone, I’m old now, but I wrote a book about the Kang Duk Won. It’s at the menu at the top of the page. Have a great day…and a great work out, and don’t forget to do some karate breaking. :O)

Don’t you just love my titles? Wimp Learns Real Karate. Ha!
The funny thing is, probably over 80% of us have the wimp image of ourselves. I don’t know what did it to you, but high school did it to me. I went in brazen and smart, and came out wondering what the hell life was about. It took Karate to return me to my natural state.
Your natural state is tough, funny, smart, you have friends, and your girl is kick ass.
No, I’m not being funny, that’s the way you are. If you don’t know it, read the win right below.
I now have the ability to be there (or here) and defend myself against attack and this is not something I was able to do when I came in here.
I also have the understanding of how the body should be working and the physics involved.
Thanks
Love,
John

That’s what it is all about. It’s not about trophies or being tough, it is about being smart and competent. I’m going to try and upload a ‘wimp’ ad from a few decades ago. If you don’t remember it, take a good look at it. These are the ads that started us on the road to redemption, on the road to self discovery, on the road out of high school and bullyism and experiences that try to chip you down.
You want to learn Real Karate, come on by my site. It’s a funky site, but it’s a blast. MonsterMartialArts.com
See ya.
Al