Sanchin Kata and how Karate has been Destroyed

Sanchin Kata as a Method for Creating Chi Power!

Sanchin Kata is a wonderful example of how Karate as an art has been destroyed, and how chi power has been lost. In this article we will describe the original kung fu form, and trace how each new version of Sanchin Kata became weaker and weaker. 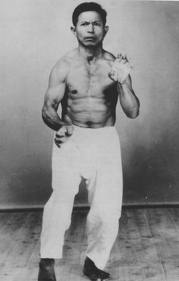 Sanchin kata came from China, where it was the first fighting form of an art called Pan Gai Noon. Pan Gai Noon translates as ‘half hard/half soft.’ The training methods were originally quite thorough and painstaking, and students would take over three years to learn this form.

Why so long? Because with the lack of understanding of accurate physics it took the students that long to make their body do what it was supposed to; it took that long to begin generating effective chi power.

Pan Gai Noon was brought to Okinawa by Kanbun Uechi, where it became one of the four major karate styles and was renamed Uechi Ryu. Interestingly, the major emphasis on sanchin kata shifted from generating chi to dynamic tension. Dynamic tension is the pitting of muscle against muscle to create strength, and thus doing the form for the generation of chi was abandoned, and the original purpose of the form was lost.

The next generation of Snachin Kata was in the art of Goju Ryu, which was developed by Gogen Yamaguchi. In this version of Sanchin the emphasis was on breathing. Yes, breathing is important, but it does not, by itself, create chi power. It gives the sensation of creating chi power, but it does not create the superior martial artist with enhanced abilities.

The degradation of Sanchin Kata continued in Shotokan, and was spread through the Shotokan variations such as Shito Ryu and Isshin Ryu. In thos arts the karate form was rendered for technique. Nowhere is attention paid to the development of internal power, and such internal power that is developed is a mere shadow of that chi power that existed in the original Chinese Kung Fu pattern.

The sad fact is that this degradation of martial art, from chi power to muscle building to breathing technique to simple self defense technique, is evident in virtually all forms of Karate, and in all forms taught in Karate.

Knowing all this, however, one can begin to undo the less than beneficial effects that have occurred by slanting a form one way or another. Simply do the forms, but lessen your intention on smaller effects, and look for the movements that will help you grow Chi.

Breath…breath to the Tan Tien…relax…sink the weight down. These basic concepts will help you find the way.

This has been a page about Sanchin Kata.