Karate Side Kick is the Most Powerful and Sneaky Kick Ever!

This Karate Side Kick is the best kick I know, and nobody else knows it. At least, I never see anybody else use it. Not in the mixed Martial Arts Matches, not in Classical karate or Taekwondo tournaments, not even in good, old regular dojo freestyle training. 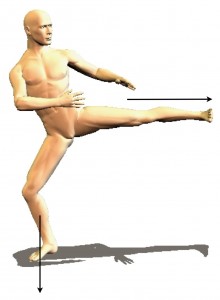 Sink the weight down when you do a Karate Side Kick!

This kick is fast, maybe one of the fastest of all kicks, and if I am not careful, and don’t pull it and merely plant it gently, it is a real rib breaker. This kick is powerful, do it right and you can knock over just about anybody. And, every time I use it, it works.

The whole name of this karate side kick is ‘replacement spin side kick’, I often just call it a Pop Kick. That’s right, when doing it I actually turn my back to my opponent and can’t even see him. Yet, the kick works like a charm, and can be used by other arts like Taekwondo, Kenpo Karate, or whatever.

When you execute this kick, you have to be able to explode out of a horse stance. This is easily done, but there is a weakness to the horse stance that you must be aware of. You have turned your body to the side, and your body is half closed.

So when I assume a horse stance, I make it very temporary. I usually let myself be bullied into turning my body and dropping into a horse, thus lulling the opponent. Being ‘manipulated’ in this way makes the attacker think I am caving in, and the surprise of the sudden kick becomes all the greater.

Now, the trick in this move is to be able to switch feet. To practice this switch, I simply assume a horse stance and explode the energy from the tan tien. I try to make the switching of the legs like the snapping of the fingers.

Do you see how this kick works? The closer you make the kick follow the thought, the more the kick becomes instantaneous, like the snapping of a magician’s fingers. The other fellow thinks he is shutting me half down, thinking that he’s got me, and wham! I explode a spin to the rear Side Kick that blows him off his feet and breaks all his ribs! The sudden drop of the weight, the explosive power of the side kick, the unexpectedness of it all, everything combines to make this one unstoppable mofo Karate Side Kick.

The karate side kick is one of the most powerful karate weapons in the universe.

2 Responses to Karate Side Kick is the Most Powerful and Sneaky Kick Ever!