The Toughest Karate Master Who Ever Lived!

There’s going to be a lot of opinions on who was the toughest Karate Master, but Motobu Ch?ki is certainly in the running. He was one of the first Karate instructors to teach Karate outside of Okinawa, and he is responsible for putting Karate on the map. 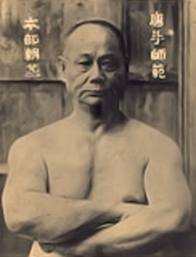 Because of he developed tremendous agility, he became known as Motobu the Monkey. He was also known as a fierce and savage street fighter. Though he was looked down upon for his street fighting, instructors liked him.

His instructors read like a Who’s Who of early Okinawan martial arts. Ank? Itosu, S?kon Matsumura, Sakuma Pechin, K?saku Matsumora, and Tokumine Pechin were some of the people who taught him. Picture somebody who studied under Gichin Funakoshi, Morihei Uyeshiba, Bruce Lee and Ed Parker.

Motobu eventually traveled to Japan. Not succeeding at business, the Karate master signed up to fight in a ‘Judo v Boxing’ match. He was fifty-two years old the night he stepped through the ring ropes and changed Karate for all time.

His opponent was a Russian strongman. Motobu moved in with one single punch and knocked the fellow out. People in the arena went wild, and newspapers reporters rushed to file stories, and here is where the story gets interesting.

The newspapers didn’t have a picture of Motobu, so they published a picture of a young fellow name of Gichin Funokoshi. That’s right, Motobu Choki put Karate on the map, but his fellow countryman, and competitor, Gichin Funokoshi, got the credit. Thus, Naha te would become known as Karate, Shotokan would be spread around the world, and Motobu went home.

Motobu Ch?ki, brawler and tough guy, is responsible for the spread of Karate. He was a karate master of tremendous punching power, and he founded the Motobu Ryu Karate style. People may not know about Motobu Choki, but they should, for he was definitely one tough karate master.