It Takes a Fanatic to Build Power Karate!

When it comes to Power Karate, I was there when Karate first got started here, and I know the truth. The truth is that the karate fighters of four decades ago, students of Shotokan and Goju Ryu and Uechi Ryu, and especially Kyokushinkai, could have taken todays mixed martial arts fighters apart quickly and easily. There are quite a few reasons for this, but let me mention just one in this article.

The True Power of Karate!

Before I get started, let me say that yesterdays culture was drug free, full of physical cultists, and we had our share of martial maniacs. We did things that todays martial artists don’t do. All of the things that were done were done with fanaticism and dedication that you don’t normally see in todays UFC fighters.

One of the most important things was that we didn’t stop our training and shift to another activity because we might get tired. Cross training was something you did for fun, go hula hooping with your girlfriends, things like that. No, if we were going to have the hardest punches we would just stay in the dojo and pound the makiwara.

Toughening the fists, as opposed to todays weak willy medico types, was done with relentless dedication. We wouldn’t hit that hard, but we kept at it, taking the time to massage the fist, immerse it in various solutions to keep it from turning hard and inflexible. Eventually the fist, without becoming injured, would become capable of going through boards, bricks, whatever you wanted. 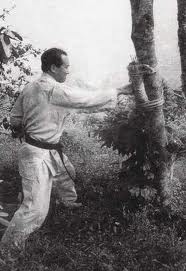 Rarely do you see this type of conditioning today. When you do see people who can break bricks, boards, and that sort of thing, know that these people have touched upon the true power that fanatic, dedicated training can bring to a student.

The only MMA fighter in recent years who showed any touch of the degree of mental toughness required for true Karate was shown pounding upon boulders with his hammerfist. In the octagon, he showed a determination that was senior to his fellow competitors. More important, he showed a punch that threatened to do some very real damage if he had just concentrated his training in that direction for another year or so.

Have you heard of Mas Oyama, or other fighters of that era? They would meditate under waterfalls in the dead of winter, commanding their bodies to an enduring toughness that is beyond todays fighters. In Mas Oyamas case, he killed or maimed around fifty bulls, something MMA fighters aren’t doing.

You think that grappler is a tough nugget? If you train with the dedication and fanaticism as they used to do in Uechi, or Wado, or Isshin, or Shotokan, then you would know that todays grappler is nothing compared to stepping into a ring with a live and snorting old bull. And the only way to deal with those old bulls was kick and punch them until they laid down and begged ‘uncle!’ Not that is Power Karate!