3 The Spread of Authentic Karate

All forms of Karate will lay claim to purity of lineage, and therefore being the authentic Karate, and many will have good reason. It is a rather unique family, and we have isolated the Martial ‘parents’ who likely created this wonderful artform.

However, as in the game  where one whispers in another’s ear, and twenty whisper in the ear later a distinct phrase is rendered into gobbledegook, there is that potential in Karate. 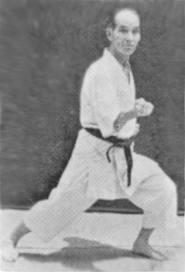 Each generation effects subtle changes. Sometimes there is good cause. Sometimes not.

The point here is that that form of Karate which has the fewest teachers in between modern day and the three gentlemen mentioned in the last article, Kanryo Higaoona, Matsumura Sokon, and Kanbun Uechi, will have excellent claim to being the purest.

That said, Karate could be said to have ended its ‘creation’ stage’ with the abdication of Sho Tai (the Emperor of Okinawa) in 1879. This is an arbitrary date, selected only because Sho Tai was commanded to live in Tokyo, and thus the bodyguards who were a force in collecting and polishing various martial arts, and inculcating them into Karate, now had no more purpose. At this point creationism likely gives way to a certain splintering effect, as different bodyguards supported themselves by teaching different versions of the art, and eventual exportation of the art to Japan, and then the world.

One of the teachers of Karate at this time was Kanken Toyama. Sensei Toyama was a classmate of Gichin Funakoshi who, as we know, is responsible or the Shotokan lineage of Karate.

What many people don’t know is that Sensei Funakoshi himself expressed a certain level of, shall we say, disappointment? In the form of his own school. There is record of him remarking something to the effect of ‘Karate being so very different than what he learned.’ Further, when his time of death came he left the official seals and such of his martial art to Shotokai, not Shotokan.

This is a matter of history, and not an attempt to speak less of Shotokan. Every art has its strengths and weaknesses, and Shotokan is not to be disrespected because of what I have recorded here.

At any rate, Sensei Toyami is responsible for a lineage of karate outside of the Shotokan path, one which lead through Korea, and may be one of the purist forms of authentic Karate in the world…to find out about the most important student he ever taught click on   What is the Best Karate.