The Karate Punch…Which of the Two Punches is Better?

The Karate Punch…Benefits and Drawbacks to the Two Kinds

The Karate Punch comes in two types. If you want to be effective in your martial art, be it taekwondo, kenpo or whatever, you need to learn the pros and cons of the two kinds of punches. Knowing these Martial Arts punches will change your combat strategy, and will effect your training and enlighten you as to the True Martial Arts. 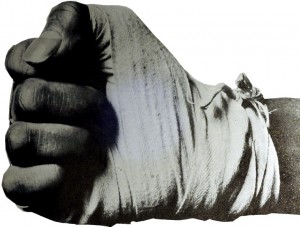 The first type of Karate punch is a thrusting punch, also called a lunging punch. To do this type of strike imagine a train running into something and not stopping. Simply, it hits, and the punch goes through.

The problem with karate punches of this type is…what happens to all the cars behind the train? They all run into each other and become a mess. Thus, a thrusting punch, while delivering the most power a karate punch can have, does have certain drawbacks.

A lunging strike, once delivered, risks becoming entangled. Also, the body behind the strike, unless the whole body has moved forward, risks becoming unbalanced. Lunge, and you are forced to commit, and possibly overcommit.

The second type of karate punch is a snapping punch. Imagine a jackhammer striking, but only once the it leaves its weight and disappears.

The problem with the snapping type of strike is, if you examine the physics of a karate punch, not enough weight. The body doesn’t have time to move into the action, and so does not put enough weight into the strike. You overcommit and lose balance, but were you really effective?

A thrusting punch is a strategy involving moving your body, using your entire weight, and if you miss because you’re going to be out of place and possibly unbalanced. The snapping punch is a strategy where you risk little, but it doesn’t always cause enough damage. The real different here is that a thrusting karate punch commits weight, but takes fifty per cent of the shock back up the arm, the snapping karate punch puts forth less weight, but the weight of the strike will be left in the body of the opponent.

In the final analysis, each punch has good points and bad, and you’re going to have to gauge commitment versus noncommittment, balance versus stability, weight versus speed, potential follow ups, positioning, and so on and so forth. When you’re done analyzing all these potentials, however, you’re going to have the right Karate Punch for any situation.