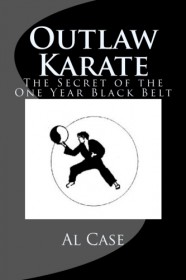 The volume is a massive undertaking which took years to write. Consider that it has over 600 pages, and nearly 250,000 words, and one quickly realizes that it is one of the largest martial arts books ever written. It is even larger than many dictionaries.

The 500 articles were written by Al Case over the last half dozen years, and were intended to bring attention to his Monster Martial Arts website. That they succeeded is obvious, as the website has become extremely popular, as have the martial arts courses on the site.

The courses cover a broad range of fighting disciplines, including karate, aikido, kung fu, pa kua chang, tai chi chuan, weapons, and more. The courses are designed to teaching one how to matrix the martial arts. Matrixing introduces a new form of logic which makes the martial arts easier and faster to learn.

The 500 articles also cover a broad range of interests. Consider the following titles.

60 How to Fight in the Dark

82 How to Tell if a Martial Art Instructor is Any Good!

179 The Greatest Training Device in the Martial Arts Isn’t So Great!

209 The Fastest, Hardest Kick In The Martial Arts

369 Tony Jaa Threatens to Kill Himself, then Becomes a Monk!

488 Is This the Most Powerful Punch in the Whole World?

The release of the 500 articles coincides with the upcoming ‘Great Matrixing Tour.’ The purpose of the tour is to bring Matrixing to the Martial Artists across the United States.

People who purchase the book will be contributing directly to the tour.

Again, the book is an instant download, and a complete viewpoint of the martial arts, including history, techniques, personalities, and event he new sciences of Matrixing and Neutronics. People interested in purchasing the 500 Martial Arts articles should go to: