How to Kill a Leopard with Your Bare Karate Hands!

You Can Kill with your Bare Karate Hands, Too!

Okay, I say bare Karate Hands, but it could be bare Kung Fu hands, or Kenpo hands, or whatever.

But the point is this is a true story of a man who killed a leopard with his bare hands. Complete with the technique he used, and the sense of personal self belief that is necessary to kill a wild animal that attacks you. 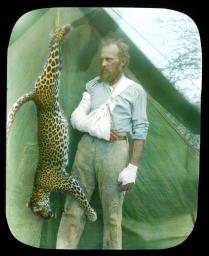 Picture from the Field Museum


Carl Akeley was born in 1864. He stuffed animals for PT Barnum, went to Africa on many safaris, and one day he had an encounter with a leopard.

I believe he had just shot a wild pig, but when he went to claim it, he found a bloody trail leading into the underbrush.

He stepped up to the underbrush, heard a growl, and a leopard jumped out at him!

He couldn’t get his gun up, the leopard latched on, and Carl was in a fight for his life!

Now, what would you do?

Hit the leopard with your fist? Probably, though it wouldn’t do much good.

Maybe you should do what Carl Akeley did, and punch the leopard down the throat.

That’s right, he punched his fist right down the leopard’s throat.

That hurt, and the leopard let go, but Carl didn’t.

He body slammed the beast, then leaped into the air and came down on the leopard with both knees, killing the animal.

Now, how much presence of mind does one have to have to do this kind fo thing?

Most people would try to pull their arm out of the Leopard’s grip, but that would go against the curve of fang. So the right way to go is right down the throat, hit him in the gag reflex, and then prepare a double knee counter attack!

Now, did Carl Akeley ever study Kung Fu? Probably not. But he was strong and had presence of mind, which are things that a stufdy of kung fu and the martial arts readily gives.